2) Alun’s Android App Part III
Alun shows you how he finally forced some interesting content onto his Android phone using Adobe and non-Adobe products. An introduction to app creation for the interested enthusiast. 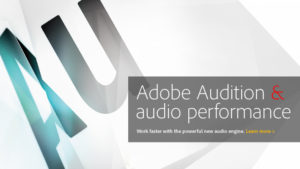 Efthymios will be talking about several processes in audio production, such as audio cleaning and mastering, using Adobe Audition. He will be introducing various tools that can be used for cleaning audio such as the Denoiser, and various filters and EQ?s. He will then go through various techniques of dynamics processing such as Compressor and Limiter, and talk about mastering audio.

incl.
Noise Reduction & Filters
Capturing the Noise Print
Using the Denoiser and the Hiss Reduction
Cleaning Clicks and Clipps
The FFT Filter and the EQ?s
Dynamics and Mastering
Compressors and Dynamics Processing
Mastering

Biog
Efthymios (aka Tim) Chatzigiannis is a Greek composer and sound artist based in Oxford. He is producing sound installations and compositions that explore the phenomenolohy of sound, and exploit physics in order to manipulate sound. He creates audio/visual sculptures that deal with particular aspects of the physics of sound. He is also active in the composition and performance of electronic music and his main interests are real-time digital audio processing, programming new audio/visual performance interfaces, and composing for film and various digital media. He regularly employs music technology and real-time audio manipulation in improvisations, live concerts, and in the studio using various DAW’s and plug-ins. His music has been performed in the UK, Holland and Brazil.

More details to be confirmed, join the group to be messaged with up-to-date info – Premiere and Post Oxford