George’s work has received many awards including several Ivor Novellos, BAFTAs and Emmys, a Classical Brit and a lifetime achievement award from the RTS. He has been nominated five times for the Academy Award. Last year he was made a fellow of the Royal College of Music.

In 1982 he scored for Richard Attenborough’s biopic Gandhi, for which he was nominated, with his collaborator Ravi Shankar, the Original Music Score Academy Award.

Amongst his vast repertoire Fenton has also composed music for a number of notable wildlife television programmes, these include The Trials of Life, Life in the Freezer, The Blue Planet, Deep Blue, Planet Earth, Earth and Frozen Planet.

His scores for TV also include: The Jewel In the Crown, The Monacled Mutineer, The History Man, and Alan Bennet series’. He has also composed for many well known theme tunes including Shoestring, Bergerac, On the Record and Newsnight!

We invite you to come along to listen to George and his music. To secure a place for this incredible evening please reply to daniella@filmoxford.org 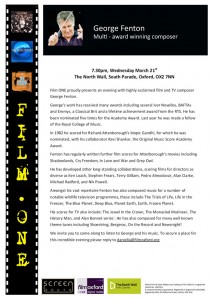