Film One Event – Five by Five

Five by Five is an example of independent film making at its best. Five directors, all passionate about making independent films, collaborated to make five high quality films in ten days. They ran a successful crowd funding campaign and tapped into a combined network of contacts from across the country. They shared equipment, locations and crew and with everyone donating their time for free, were able to successfully make five films for roughly the cost of one.

This evening we are pleased to have the opportunity of meeting two of the founding members.

Martyn is a Producer, Director & Writer who had a sales and marketing background before changing to a more creative career in film. He has co-produced and been employed as a Production Supervisor within the UK indie feature film circuit. He is also a director of music videos, virals and short films. Martyn is co-directing his first feature film later in 2012 and is CEO of Chalkstar Films.

Producer, Director & Writer Nicki came to film from a finance and project management background. She began screenwriting in 2008, and set up the production company Eavesdrop Films in 2011. Her directing debut “Jezebel” was completed at the end of 2011, and she has several short films and music videos lined up for 2012; as well as a feature film in development.

Booking is essential. To secure a place for this event please contact daniella@filmoxford.org

For more information about five by five visit:  http://www.fivebyfiveoxford.com 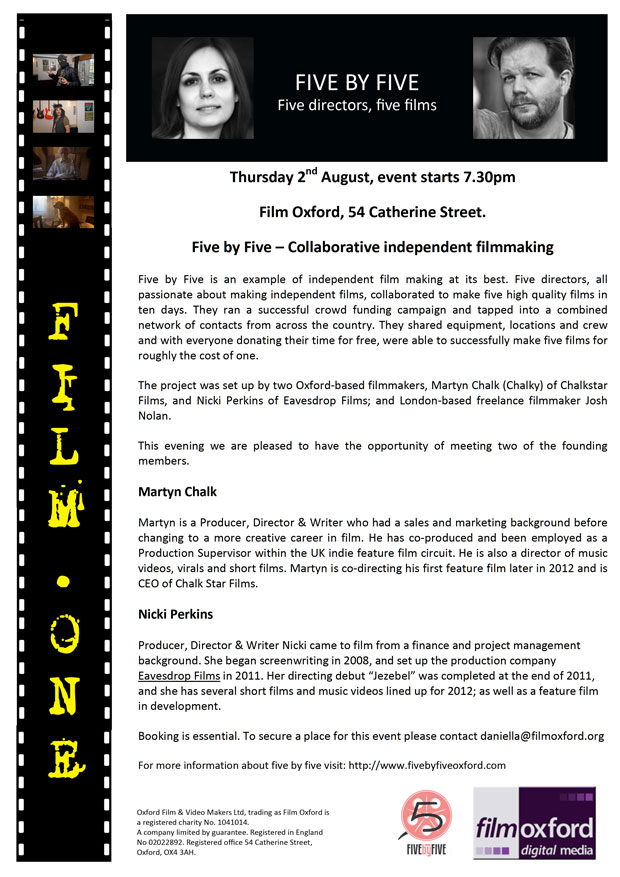