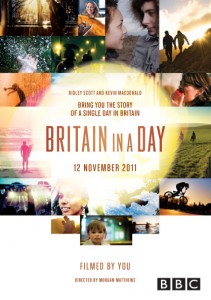 Britain In A Day

While the London Olympics fast approaches, a major documentary project called Britain In A Day is being produced.  Britain In A Day will be based upon Ridley Scott’s Scott Free Production Life In A Day, which was created through showing clips of occurrences from around the world on one particular day, July 24 2010.

Everyone will be able to upload footage of something significant in their lives.  This footage will then be used to create a time capsule of Britain as well as a feature-length documentary, which will be screened next year on BBC Two.  The material uploaded should be the best samples of your rushes not an edited film, and please keep your rushes carefully till May 2011 in case the production team needs to come back to you.

A dedicated team coordinated by Rosa Productions will run filmmaking workshops with people in different communities around the UK.  There will also be a series of “how-to” films and guides supplied by the BBC and aimed at teaching anyone to use phones or cameras to record their day and how to upload their material.