It’s the moment you’ve all been waiting for Film Oxford has set up its own production group.

Every fortnight budding filmmakers such as yourself are meeting to pitch scripts, take them into production, constructively critique each other’s work and produce high quality films for festivals, broadcast and online! 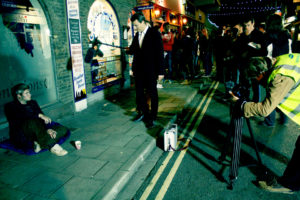 If you have an a demonstrable track record of film-making, have completed relevant film-making courses at Film Oxford or elsewhere, studied film at university or been involved with the making of a film, then we want to hear from you!

* Join an enthusiastic and talented group of film-makers, composers, ‘techies’ and artists who will work on projects collaboratively.

* IMDB and on screen credits.

* Active connections with other Film Oxford groups including the scriptwriters’ group and 10×10.

* Advice on funding projects from those who’ve done it before.

Date: 2nd and 4th Thursday of every month at 8:00pm The first meeting will be happening 28th of November